5 Tactics For Taking Bucks During the Post-Rut Doldrums 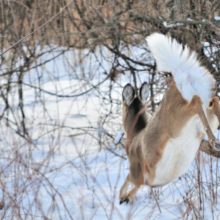 Some hunters just pack it in when the rut is over. Dan Thurston doesn’t have that option. The pressure for him to put clients on big bucks is unchanged when the action slows during the post-rut–which doesn’t seem to bother him a bit. “Sure, it can take some extra effort to get on a good deer now, but our success rate is about the same after the rut as it is any other time.” To be specific, eight out of every 10 hunters who bring guns to Thurston’s camp late in the whitetail season go home with a trophy. “As a matter of fact,” he says, “our two biggest bucks ever were both shot well after the peak breeding period.”

Here are Thurston’s post-rut secrets:
#1 – His Mantra
“Be flexible,” he says. “If it’s cold and the deer are hitting feeding areas hard, we sit and wait for them. Yet we’re always ready to change tactics if warm weather or late rutting activity has bucks off major food sources. We go right after them then. Our rifle season lasts into December, and we’ll make pushes to get bucks on their feet if we have to.”

#2 – His Secret Weapon
“The Weather Channel and all the weather dot-coms are invaluable now. Those forecasts really dictate where and how we hunt. If storm systems or cold fronts are moving in, I know deer will be on their feet feeding. The last few gun openers here brought strong snowstorms, for example, and we had excellent luck sitting over prime late-season food sources.”

Find out the rest of the tactics here