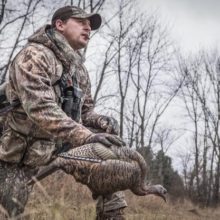 There are tried-and-true ways to assure you’ll come home empty-handed from the turkey woods. They’re easy. Just follow these steps as laid out by champion turkey caller and Realtree pro staffer Anthony Virga, who has seen them in action and learned some of them first-hand.

“Everybody says, ‘patience kills’ and it does,’ Virga said. “I think I just figured it out and got a little more accustomed to patience in the last few years.” He provided this scenario. Many times a tom will stop gobbling 100 yards out after he’s been working in all morning or came quickly for the first couple hundred yards. Then he stops. Not that he’s seen you, he just stopped. Smart birds, or birds that have been pressured by hunters, may do that, Virga said. Maybe you turned him off with too much calling, maybe he just lost interest. Whatever the case, you get antsy and decide to move in or try another spot. Do yourself a favor, Virga said, stay awhile. “A lot of times all it takes is another 15, 20 minutes to wait him out, and he’ll come in.” he said.

Mistake 2. Leave in a huff.

Another tip, related to No. 1, Virga said, “is when it is time to leave – and I’ve seen a lot of guys on TV do this, even guys I’ve hunted with, they just stand up and take their mask off; they talk; sometimes they unload their gun or whatnot, making a ruckus.” Big mistake, he said. “Get out of there the same way you came in,” he said. “Get your stuff together quietly; walk out really slow. That way you can come back in a couple of hours and make another attempt to kill that turkey, but once you screw him up, it ruins your chance to hunt him later that day. I’ve scared a lot of birds over the years. We all have. There’s a gobbler coming, then he stopped gobbling for 15 minutes and you can’t take it anymore and the next thing you know, you have your facemask off and you’re staring at a gobbler staring at you 30 yards away. And the next thing, he’s gone. Get up slow and quiet. Pay attention.”