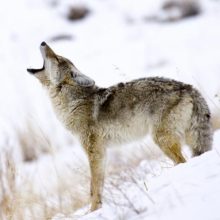 Many coyote hunters shy away from public land, believing it overrun with hunters, and that all the young, uneducated coyotes were killed early. Any surviving coyotes have either left the area or are super wary, having learned from previous run-ins with hunters just what those rabbit-distress sounds really mean.

Don’t believe it, don’t ignore public lands, just go in with a plan, according to Realtree pro staffer Mark Zepp of Zepp’s Predator Calls. In fact, if you keep in mind a handful of basic tips, you could be harvesting fur where other hunters are hesitant to tread.

“There are different ways to approach both public- and private-land hunting,” Zepp said, “but there are two tried and true rules that apply everywhere.”

First, Zepp said, is the wind. Whether you’re hunting public or private land, this must be a top-priority concern. “I can’t over-emphasize the wind aspect,” he said. “If the wind is not correct and blowing in the right direction, don’t go in. I tell hunters they need to think like they are bowhunting big deer when hunting coyotes and pay close attention to the wind.”

This is a concern when it comes to hunting public land, he said, because “many guys only hunt on weekends and they get to a place but the wind is marginal and not what it should be but they only have a day or two to hunt so they just go ahead and call anyway. If you were hunting a trophy-quality deer you’d never do that.”

Find out the rest of the tips here