Do You Know Where to Shoot a Black Bear? 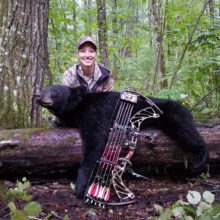 After all the work of getting within shooting distance of a big bear this spring, you’ll need confidence in your ability to make a great shot. Bears are big, tough animals that are unforgiving when hit bad. Many new bear hunters carry with them shot placement and strategy derived from experience deer hunting. It’s similar, but different. Bear anatomy is slightly different, but more importantly, a bear’s body structure allows for some odd angles and considerations that the bear hunter must understand. Here are five keys to making a great shot this spring.

Go For A Double-Lung Hit (Heart shots are overrated)

Bears seem to always be moving, especially when you’re hunting them over bait. Perhaps it’s a predatory instinct in humans, but seeing our prey move makes us feel like we have to act quickly. The impulsiveness to rush the shot is probably the biggest mistake that a bear hunter can make. My favorite shot is a broadside or slightly quartering shot with the onside front shoulder forward or straight down. A broadside shot gives the most room for error and the greatest opportunity for the most lethal hit of all – a double lung shot. In my opinion, the “heart shot” is overrated. A double lung will often kill an animal quicker, it’s a larger target, and the organs are further away from big bones that stop penetration.

A bear has the body structure to put himself in all types of odd shapes. He can be sitting on his rump like a dog, or be in a “cupped” shape with his head and rump closer to you than the torso.  He could be sprawled out lying on his belly. He could be standing up on two legs. All of these positions are much different than a deer. During the magic time when a bear is in shooting range, he’ll more often be in a bad-shooting position than he will be in a favorable one. You’ll need to be disciplined and wait for a broadside shot – especially the archers.

Hunting with firearms for bear is more forgiving. A high shoulder hit will drop a bear, but I’d still suggest a double lung hit. If you’ve got a big caliber gun, a frontal shot square in the sternum is deadly, but requires precision. If you’ve got the time, my advice is to wait for a broadside shot with firearm and bow.