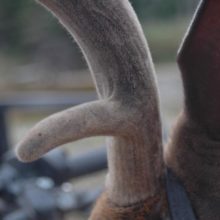 Have You Ever Killed an Abnormal Buck?

I barely noticed the buck’s limp as it walked toward my treestand at a pace steady and quick enough that if I didn’t grunt him to a stop, I might have missed my chance. But I did notice one side of his rack seemed a little “off.” I was already drawn and when my sight pin found vitals I released an arrow. The buck raced off in a wide arc, falling some 70-plus yards away.

Walking up on the fallen buck, I was curious to see the left side of his rack, which I figured might just be a typical fork, or even a spike. It was a fork, but the beam was oddly twisted and skewed out to the side rather than forward. That seemed a little odd, but I was really rocked when I rolled the buck over and realized his back, right leg was entirely missing below the second joint. The deer had apparently suffered some type of injury, but the stub was now healed over. That was just one of several antler growth deformities I’ve encountered over my years as a hunter and wildlife biologist.

Antlers are among the fastest-growing tissues in nature, capable of growing up to an inch (or more) per day during peak periods. The trigger for that growth is photoperiodism or changes in amount of daylight. In spring, increasing day length prompts the pituitary gland to produce growth hormones. That triggers the release of insulin-like growth factor (IGF), which ultimately stimulates antler growth. The process starts slowly, but increases as the days grow longer.

Later, decreasing day length again plays a role, stimulating the pituitary gland to increase secretion in testosterone. This triggers a process called mineralization. Soft antler tissue is converted to bone when minerals are deposited within the matrix of cartilage and blood vessels.  Once the process is complete, blood supply to the antlers is cut off. The antlers and their velvet covering die off. Velvet comes off completely within about 24 to 48 hours, leaving dead bone of the completed rack behind. Still later, shortly after the days gradually start getting longer, there is another minor pulse of hormones that results in an abscission line between the skull and antler pedicle, and the dead antlers are shed. This occurs in late winter to early spring. And the process starts all over again.

Find out the reasons deer have deformities on the antlers here