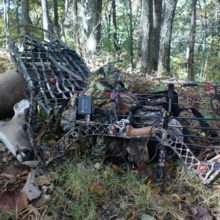 The start of another bow season is just around the corner. Every hunter that heads afield with a stick and string does so with big hopes and dreams.

However, despite our best efforts many of those dreams will not come to fruition. And while there’s no denying that the early season is a difficult time to fill a whitetail tag, it can become nearly impossible if you fall into the trap of committing a handful of these early season bowhunting mistakes.

You Woke Up Too Early
When you’ve been waiting since last season for the first day of the new one to begin, the last thing you want to do is stay in bed. However, if your sights are set on arrowing a mature whitetail buck maybe you should sleep in. Here’s why?

During the early season most mature bucks aren’t experiencing the rush of testosterone as they will in a few short months. This means they are less likely to be on their feet during daylight hours and if they are, it will probably be during the last few minutes of light.

Applying unnecessary hunting pressure during early season only increases the chances of spooking the buck you are hunting and ruining your hunting area before the rut even begins.

The safer tactic would be to pattern your target buck on an evening food source to predict where and when he will be feeding. Focusing on evening hunts will keep pressure at a minimum and let you catch a few more hours of sleep. Of course, you also have to get in and out of the hunting area undetected.

Check out the full article here