The Only Call You Need for Turkey Hunting 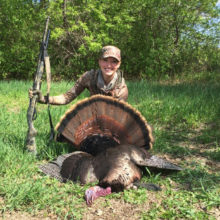 If you’re going to learn one call for turkey hunting, one turkey sound that will let you speak their language and provide the best chance for you to lure in a gobbler, learn how to yelp.

The yelp is the most common sound a hen turkey makes when communicating with other turkeys, according to Realtree pro staffer Chad Schearer. “If I can make only one sound for hunting turkeys, that’s the sound I’m going to make,” he said.

Schearer, host of Shoot Straight TV, has hunted turkeys in 17 states (and New Zealand). Yelping, he said, is the turkeys’ universal call. “The yelp is a common communication sound they make year-around,” he said. “It’s letting gobblers know where they are.” And that’s why the yelp is so effective in calling in a curious gobbler or a young tom, as long as you aren’t calling overly aggressively at them.

“I’ll use a yelp all day,” Schearer said, though he’ll vary it depending on the time of day.

“First thing in the morning, I start with a light yelp,” he said, “and I love a slate call for that because I can really quiet it down by how I hold it. I put my index finger on the bottom to help deaden the sound and then call real light. I don’t get super-aggressive.”