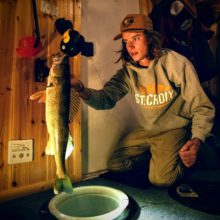 by Dave Csanda
We’ve all grown very fond of the “Trap Attack” philosophy of aggressive ice fishing, pioneered by ice fishing legend Dave Genz, where you move and stick, stick and move, continually testing new areas and holes using active jigging techniques. The philosophy actively pursues new, untouched schools of walleyes, panfish and other species, rather than repeatedly working over known areas that have seen a lot of fishing pressure.

Which is all well and good for impatient folks with portable shelters and the gumption to stay on the move.
Some anglers, however, either have their own wheelhouses—which aren’t quite as mobile as a lightweight portable shack—or rent time in a “permanent” house, perhaps as part of an all-inclusive package from a resort or ice fishing service. If you’re a guest, you rely upon your operator to move the house occasionally to stay on top of active biters. Some do a great job of this; others do not. If they plunk their houses down at early ice and don’t move them until the ice or shelter season ends, you may be fishing in a tough neighborhood where biters are finicky or scarce.