How to Kill a Nocturnal Buck 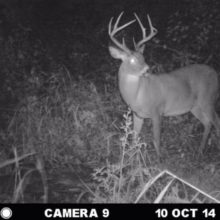 By Josh Honeycutt author of Brow Tines and Backstrap

Is There a Deer You Only Receive Nighttime Photos of?

It happens every year — we see bucks on camera that only seem to move under cover of darkness. This can be extremely frustrating, yet fairly simple to overcome. It just requires a firm understanding of big-buck behavior and a skillfully executed plan.

There are several key points to understand before proceeding. The first, every buck is different. They all have their own personalities. One mature buck might move mostly at night, while another mature deer is a frequent daylight walker. It’s all dependent on the behavior of specific deer. Choosing to hunt those bucks that don’t mind the sun is a wise choice.

Another thing to remember is that deer activity is relative, and habitat is key. You can’t kill big deer where big deer don’t live. Learn how to read the landscape and make a cogent decision on whether or not the area can sustain mature deer, or if they’ll be spending most of their time on neighboring properties.

Lastly (for the sake of this article — there is still so much more to consider), I’ve noticed that mature bucks that rarely move during daylight often slip up and move when the first good cold front of October hits. It’s like a light switch flips and causes them to go off on a feeding frenzy. Monitoring the weather and waiting for such a time can be very effective. It’s how I killed my 2016 Kentucky buck, which had been nocturnal up until the day I killed it. I set up within 100 yards of the buck’s bed and waited for it to slip up. The 5½-year-old deer came waddling out of the brush about 45 minutes before the end of legal shooting light. After a 10-minute stare-down, I plunged an arrow right behind the shoulder through the buck’s lungs. The massive drop in temperature got this deer up on its feet well before it normally left its bedding area.